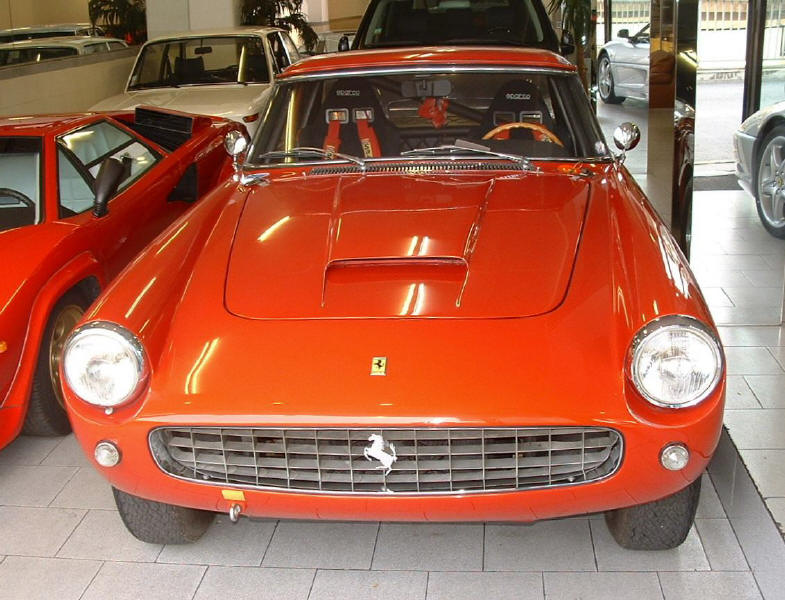 The car for sale is ready for racing, but road-legal and perfectly usable every day if you wish.

This model was presented at the Paris Motor Show in 1958, and is powered by the famous V12 "Colombo" 250 engine, fitted in the 250 Berlinetta Competizione Long wheel base.

We see it on the picture below, both in version Spider and Coupé, surrounding the Berlinette SWB. Same engine, short chassis for the SWB, and 20 cm longer for the PF Coupé, - actually the same as the "Tour de France" that won so many race victories (actually more than the GTO and the SWB...). This generation of Ferrari 250 two-seaters represents an absolute pinacle in Ferrari's history. 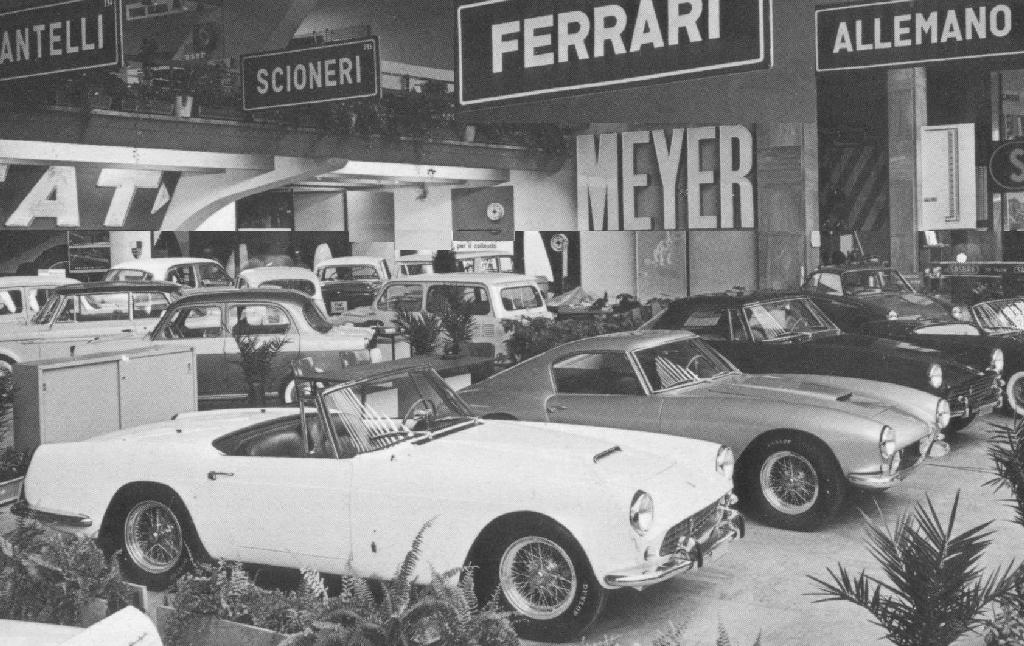 This helps to understand why Ferrari 250 was then, by far, the absolute best in sports cars with no competitors anywhere. No other engine in the world could ever equal nor get close to  the world domination of the 250 "Colombo" Ferraris.

The line of the 250 PininFarina Coupé is due to the talent of Battista Pinin Farina. It is contemporary to the legendary Spyder California and to the Berlinetta 250 GT Competizione TdF (of which this Coupé is the road version, with a slightly "detuned" engine ). The most beautiful specimens of this model are exposed in reference in prestigious Car museums (below in the Chrysler Museum, Wade Fuller collection). 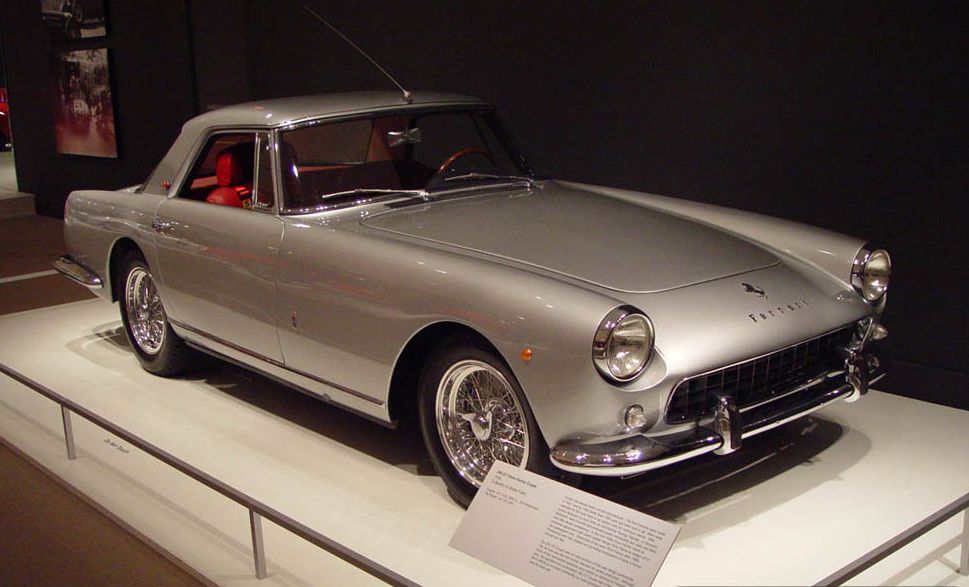 Lower and much more elegant than the earlier 250 GT Boano, the PininFarina Coupe's esthetics is close to the perfection, with its thin windshield pillars and its short cockpit, its general "cigar" shape which signs the cars of which one dreams. It is still one of the most beautiful car ever made, even by today standards. But the most important feature is that this two-seater Coupé is powered by the legendary all-alloy V12 Colombo 3-liter engine. 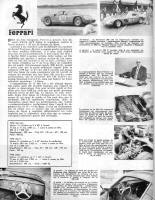 The car offered for sale 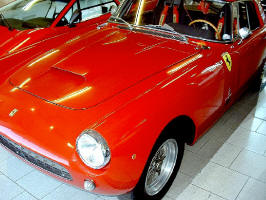 This car is presented to the attention of expert customers and collectors. We have acquired this specimen, selected among many others which were not retained, either because their history was not satisfactory, or because their condition was not as excellent.

Finished in rosso corsa and black upholstery, the car has been registered for the first time in 1958. It is a Series 1 original example, but it benefits from the technical improvements of the Series 2 version: engine equipped with the ultimate technical evolution of the 250 breed with in particular the new cylinder heads resulting from the experiment competition of the 250 Tested Rossa, with the spark plugs placed outside V, the two distributors, helicoid springs of valves. The four brakes are with discs, to replace the drums of the first series.

Regarding its overall condition, let's start by saying that it has been admired in several historic races and meetings, and driven though competitions, without the least mechanical trouble.

We will not use the term "concours condition" because it is a car that is frequently used, and is not a museum car that you could be afraid to drive. On the contrary, the owner can freely run the engine high in the revs, and take the car to its full potential - a very extreme pleasure for amateurs. At the wheel of this car, the driver can feel the same sensations as the most famous racing drivers with the race-tuned Berlinetta Competitizone ("Tour de France").

In effect, the car was restored and race prepared by one of the very best specialists in the world for classic Ferraris, Autofficina Sauro in Bologna, that have gained their reputation by maintaining classic Ferraris belonging to one of the world greatest Ferrari Collectors, Albert Obrist. The engine has been fitted with big Weber carburettors (40 DCL6, which means 40mm instead of 38 mm) that is those of the race versions such as the Short Wheel Base or the Testa Rossa. 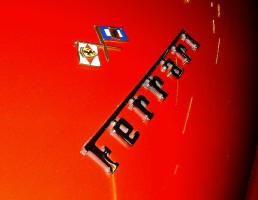 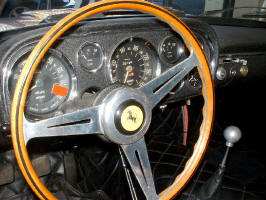 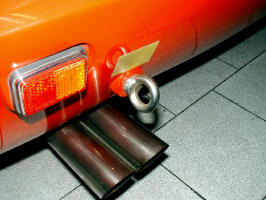 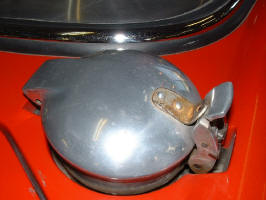 From the technical point of view and performance, the use of the of the all-alloy V12 is a pure treat: we estimate that it delivers substantially more than the original-spec 240 HP. This engine is the one which won Le Mans three times (1958, 60, 61 with Gendebien, and 63 with Scarfiotti)...

Powerful and incisive, well-served by the 4-gear box with rather short ratios, the engine is simply perfect. We drove the car beyond 230 km/h in a raucous, thrilling sonority: the are frank, the locking of the overdrive is done without any jolt, and you can draw the quintessence from this V12 up to 7000 t/mn without hesitation.

Comfortable and ultra light racing seats with racing safety belts provide a perfect driving position, whilst they could being easily replaced if desired by the standard seats. The car is fitted with all necessary safety equipments: racing fuel-tank with external fast-opening cap, fire-extinguisher, anti-roll-bar, etc.

A journey in this 250 GT is an indescribable pleasure.  Possessing such a car is not given to everyone, and you cannot help but feeling proud, since knowing and appreciating this kind of automobile is a proof of an in-depth knowledge on the history of the best classic cars, a sign of taste and of search for perfection. The thumbs-up are many when you drive it on the road, everyone appreciating the splendid lines and the class of the car. 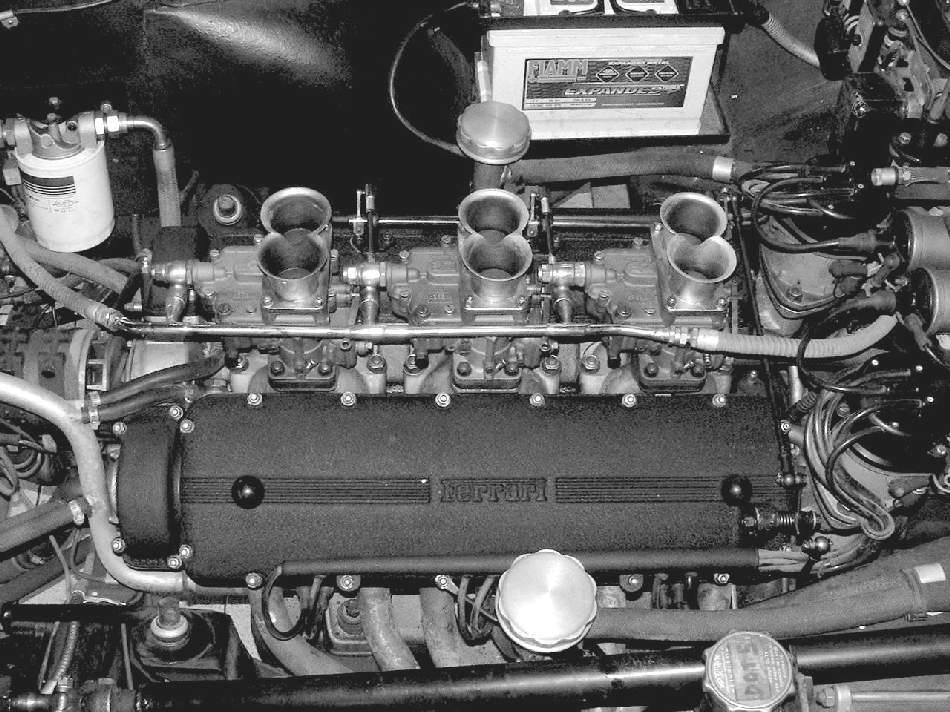 Opening the bonnet always generates the admiration of the most blasés experts, and camshaft covers as much as all the accessories of the engine bay immediately reveal the best Italian master-work, the art of Enzo Ferrari and its Team of engineers lead by Gioacchino Colombo.

The asking price is moderate, compared to the scarcity, and to the historical importance and to the quality of this car, in an excellent condition, ready to drive, different from certain museum cars, weakened by a dubious maintenance. Ferrari 250 engines have a justified reputation of robustness, a quality which founded the innumerable successes of Ferrari in endurance races.

When you consider the fifty thousand (!) modern Ferraris built, of which a good proportion is worth 100 to 150.000 Euros on the second hand market, you immediately realise the degree of desirability reached by the few hundreds "250" Ferraris - highly sought-after collector's items and jealously preserved by their owners.

Only 351 specimens of the 250 GT PininFarina were ever manufactured by the Ferrari Officina. We estimate that less than half of them still remain in a usable condition, of which a little proportion is in perfect condition.

Its market value rises setadilu: it becomes difficult to find one in beautiful condition. Approximately four years ago, you could get one for 60-80.000 €. But the market has doubled. The purchaser who acquired our last Coupé 250 PF in late 2003, made an excellent deal, and was pleased to pay approximately 130.000 Euros. More recently (December 2004, Bonhams sale in Gstaad) the same model sold for 150.000 € with taxes.

This just confirmed what we have been saying for a while: that the 250 GT PF is now beyond 150.000 Euros as an average reference price, to compare with the 230 to 260.000 Euros that it is necessary to spend to acquire, for example, a "Lusso".

This financial and historical logic applies to all the models of the 250 GT generation and gives them a stable market price for the most expensive (over a million Euros for a SWB), and regularly rising for the others, whether you consider the Boano, the Europa, or the 250 GT PininFarina. This is probably last 250 GT Ferrari in excellent restored condition still available at an affordable price. 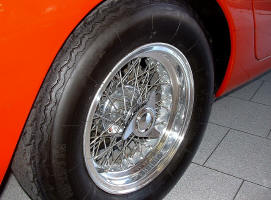